Here comes the news that may interest you.

Recycling is the new trend, it has come to stay, and it is very important we take it seriously 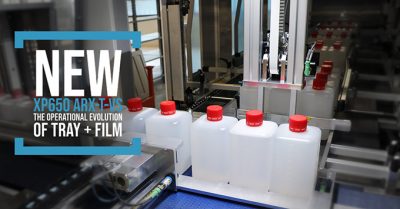 The world of packaging looking for the ideal pack

“The world of production has been paying more and more attention to the optimal use of available resources and is looking with growing interest at packaging solutions that ensure high standards of operational efficiency, product quality and advanced process automation; all this is aimed at achieving a perfect balance between competitiveness, energy saving and environmental sustainability of industrial activities.”

Starting from these needs of business world, SMIPACK has developed a new model: the XP650 ARX-T-VS, that is an interesting evolution of the shrink wrapper XP650 ARX-T with 90° infeed and tray forming device, that has been on the market for several years. In addition to the main characteristics of the machine from which it derives, the new model is equipped with a motorized two-axis push-in device to replace the traditional system, that allows to significantly speed up the product grouping process.

Several solutions for a wide range of sectors

XP650 ARX-T shrink wrapper with 90° infeed is the ideal solution for packing a wide range of containers, especially oval, with a square or rectangular base, in glass, plastic and metal. In fact, this model allows to insert a corrugated cardboard tray at the base of the pack before the wrapping operation in shrink film. The cardboard blank is picked by a pneumatic picker and transported to the tray formation area by a motorized pitch chain controlled by inverter and encoder.

Once the cardboard blank is placed under the moving products, the front and rear flaps are folded mechanically, while hot melt glue is sprayed on the side flaps that are then folded by a pneumatic device. After their formation, the trays containing products move to the film wrapping zone and then to the shrink tunnel. Thanks to this fully automated packaging process, the product is protected and its integrity is preserved during the storage, transport and distribution phases, in order to reach final consumers in perfect condition.

The advantages of the two-axis push-in device

In the XP650 ARX-T model, pack formation takes place by means of a one-axis motorized push-in device controlled by a servomotor, that carries out the operation of product insertion by moving forward on the horizontal plane and then moving back to the initial position.

The XP650 ARX-T-VS version is instead equipped with a two-axis motorized push-in device, controlled by a servomotor, that moves both horizontally and vertically, thus allowing loose containers to move faster on the infeed belt of the grouping area of the format selected by the operator through the control system.

This results in significant time saving, which increases the machine productivity.

For further information on the new XP650 ARX-T-VS shrink wrapper and on all other packaging solutions supplied by SMIPACK, we invite you to contact our sales department.

If you have questions about these machines, please feel free to write or call us.
There are several models on the page here – then you scroll down to the XP Series.

This website uses cookies to improve your experience while you navigate through the website. Out of these, the cookies that are categorized as necessary are stored on your browser as they are essential for the working of basic functionalities of the website. We also use third-party cookies that help us analyze and understand how you use this website. These cookies will be stored in your browser only with your consent. You also have the option to opt-out of these cookies. But opting out of some of these cookies may affect your browsing experience.
Necessary Altid aktiveret

Any cookies that may not be particularly necessary for the website to function and is used specifically to collect user personal data via analytics, ads, other embedded contents are termed as non-necessary cookies. It is mandatory to procure user consent prior to running these cookies on your website.